This is the tale of two Harriets: Harriet Tubman and Harriet Beecher Stowe. I’ve long known their names, but only recently have I become more aware of their stories. This week, as we begin both Valentines and Black History Month, these women are my new heroes. I am convinced that the intersection of their stories can provide inspiration and examples for our own, especially now.

The two Harriets’ earthly days converged from about 1820 to 1896. One was black, the other white; one a slave, the other free. While both were from large families, one’s siblings were sold away while the other got to enjoy life with hers. One was illiterate; the other an author of some 30 books. One was beaten and oppressed; the other, by earthly comparison, blessed.

How different their lives were! Yet, in each of their hearts was the Spirit of God. They both knew the Lord, and, as they listened to and followed His voice, they lived lives that, together, impacted the entire world.

The tale of these two Harriets makes me think about our own world, our own society. Even as they in their individual circumstances sought justice in a society that allowed and even encouraged slavery, we have injustices in our world today that need to be righted. Who is responsible? Who can help? Who should help?

The tale of two Harriets tells me that we all can do our part.

God wants His people to:

“Learn to do good! Seek justice, relieve the oppressed,
defend orphans, plead for the widow.” Isaiah 1:17

In 1849, Harriet Tubman was the oppressed in need of justice. No one handed it to her, though. She ran for it. She ran for her life and freedom, crossing finally into Philadelphia. From there, she began to risk her life to help others gain 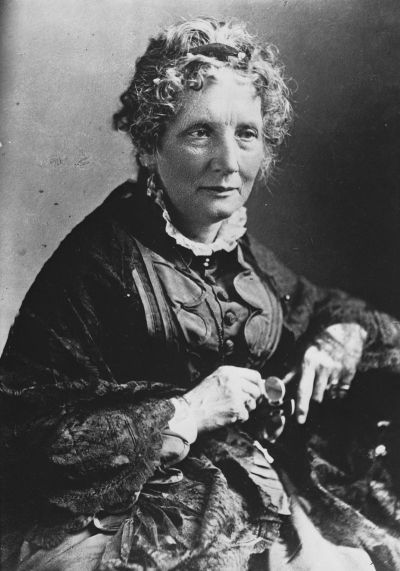 their freedom. In 1850, she took her first of 13 trips back into the land of slavery, ultimately rescuing many people through the Underground Railroad.

That same year, the other Harriet – Harriet Beecher Stowe – was stirred into action by the injustices of The Fugitive Slave Act. During that season, her family harbored an escaped slave named John Andrew Jackson one night. Harriet agonized over his scars, listened to his stories and sympathized with his loss of wife and child to slavery’s wretchedness. She gave John clothes and money and sent him on his way through the Underground Railroad. Then she picked up her pen and began to write what Lincoln would later ascribe as the book that started the Civil War.

Two women, so different, and yet, so similar. They were both small in stature (5’2” and 5” respectively), but they now stand larger than life. They were both repressed as women [CI Editor’s note – BLESSED to be women], yet each was undaunted in her purpose.  And both had guiding visions for her mission. Harriet Tubman’s visions resulted from a head injury inflicted by a cruel master.  Yet what the enemy meant for evil, God meant for good. Harriet later claimed that God used these to lead her as she led fugitive slaves to freedom.

Harriet Beecher Stowe’s vision came at church one day. God showed her a slave dying from being whipped by a cruel master. She went home from that service and ultimately began writing one of the most influential books ever written, Uncle Tom’s Cabin.

These two women, bold, daring, courageous, both lived out God’s calling on their lives – indeed, God’s calling for all of us:  “This is what the Lord Almighty said, ‘Administer true justice; show mercy and compassion to one another. Do not oppress the widow or the fatherless, the foreigner or the poor. Do not plot evil against each other” (Zechariah 7:9-10 NIV)

Over and over throughout Scripture, this theme of doing good and bringing justice to this world is repeated.

The tale of two Harriets has been breathtaking to me. Their lives echo courage, strength, tenacity and boldness that is needed as much today as it was in their day. Like them, somewhere along the continuum of all our differences, we also find our God-given similarities. As we begin the month of love and Black History, these can inspire us to rise up with everything in us in our culture to seek justice, do good and care for others in Jesus’ Name.

Though I’ve found no evidence these women met in this earthly life, I imagine they stand at the portals of glory challenging us:  “LOVE LIKE THIS.” May we use all the gifts, abilities and even circumstances God has given us to make a difference in our broken world, this month and always.

‘A Virtual Pilgrimage Inspired by Abraham’: Tour the Holy Land from Your Home During Lent

‘A Virtual Pilgrimage Inspired by Abraham’: Tour the Holy Land from Your Home During Lent