All 60-plus police officers in Fayetteville, N.C., took a knee Monday to show solidarity with protesters in what has become a law enforcement trend in recent days.

Police officers in big cities like Philadelphia, Atlanta, Detroit, New York City, Los Angeles and Phoenix, and smaller ones such as Chattanooga, Tenn., and Des Moines, Iowa, have also taken a knee in the past two days.

The Fayetteville Police Department explained its action on Twitter.

“As a show of understanding the pain that is in our community and our nation regarding equality, the #FayPD took a knee to show that we also stand for justice for everyone,” the department said in a Tweet. “We are committed to listening and treating everyone with dignity and respect. #LoveONE.”

✔@FayettevillePD
As a show of understanding the pain that is in our community and our nation regarding equality, the #FayPD took a knee to show that we also stand for justice for everyone. We are committed to listening and treating everyone with dignity and respect.#LoveONE 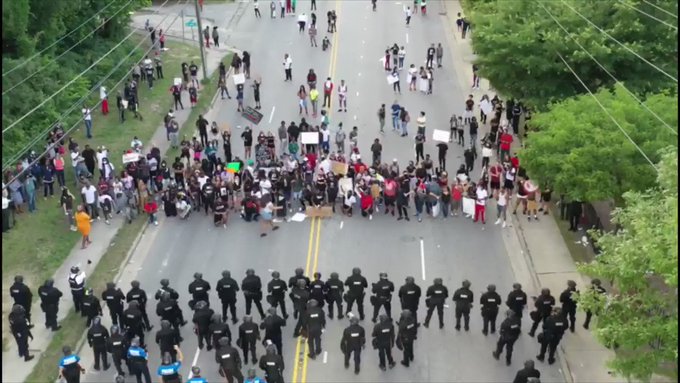 WTVD reported the incident ended with “hugs and hand shakes between the officers and protesters.” Some protesters cried, the Raleigh News & Observer reported.

The rally was protesting the death of George Floyd, who was killed after a Minneapolis officer kneeled on his neck. Two autopsies, including the one by the Hennepin County Medical Examiner, labeled it a homicide.

“The protesters first got mad when asked to step back, but once the officers knelt down, it was on,” Mimamo Monika posted on Facebook. “Men and women alike started crying and then cautiously came toward the police officers to shake their hands. These are moments that will go down into history and will be taught to future generations.”

In Riverside, Calif., Sheriff Chad Bianco and his deputies also took a knee when facing protesters.

Conversations and actions, he said, are key.

‘Ignite Houses of Revival’: How to Pray for 2021 and What to Expect from the New Year

‘He is Still on the Throne’: Sean Feucht Shares How Christians Can Navigate During This New Season